Back in the day, which is always a Wednesday, before we began our Knowne World Tour, it was arranged for Jeff to get his Silver Crescent at the same event as his Maunche because he was leaving Portsmouth for San Diego. Because of this, scroll requests got backed up. I wrote the words for his Crescent that was read in court, but he had no scroll. I promised him I would write an icon for him. THEN-

He left for Caid.
I got assigned Konstantia’s Herald Extraordinary scroll.
I wrote my thesis.
I moved to Caid.
He deployed.
I got the gilding down on this.
His backlog scroll came in from the East, and it’s lovely and I gave up.
He came back.
I did things other than paint.
We moved to Trimaris.
I was like, “Oh I still have this.”
And he was like, “So where is it?”

Panel is one of my handmade ones on a birch art panel with my own gesso. It is a hot mess and was not easy to paint on. I noticed the places where I didn’t sand as well, or touched a lot during demos and displays were prone to pitting and bad adhesion of the tempera. On the bright side, a lot of the flaws I had were the same flaws I saw on very old post-period/in-period panels. So there’s that, I guess. If anyone can take my experimental art and actually like it, it would be Gieffrei, anyway.

Saint: Nicholas of Myra, known to most of us as Santa Claus, but also the patron saint of sailors, and, of course, heretic puncher supreme. The reason I chose him should be evident. (Hint: Nothing to do with punching heretics.) The pattern is modern. Most period icons of St. Nicholas are rather boring and rarely show him with a boat/in a boat. Those are all post-period.

Green sky/blue water = Jeff’s arms, sans martlets, though in retrospect, I could have drawn one in. Green is also his favorite color.

Silver Crescent is on the boat, not only because service to his kingdom, but also to his country.

After it cures for a couple of weeks, I will oil it, let it sit for a month, and then it can join the gallery on the staircase as an actual scroll. 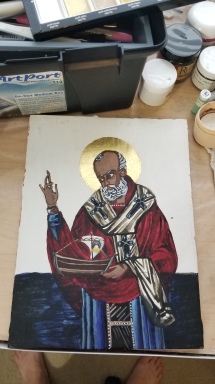 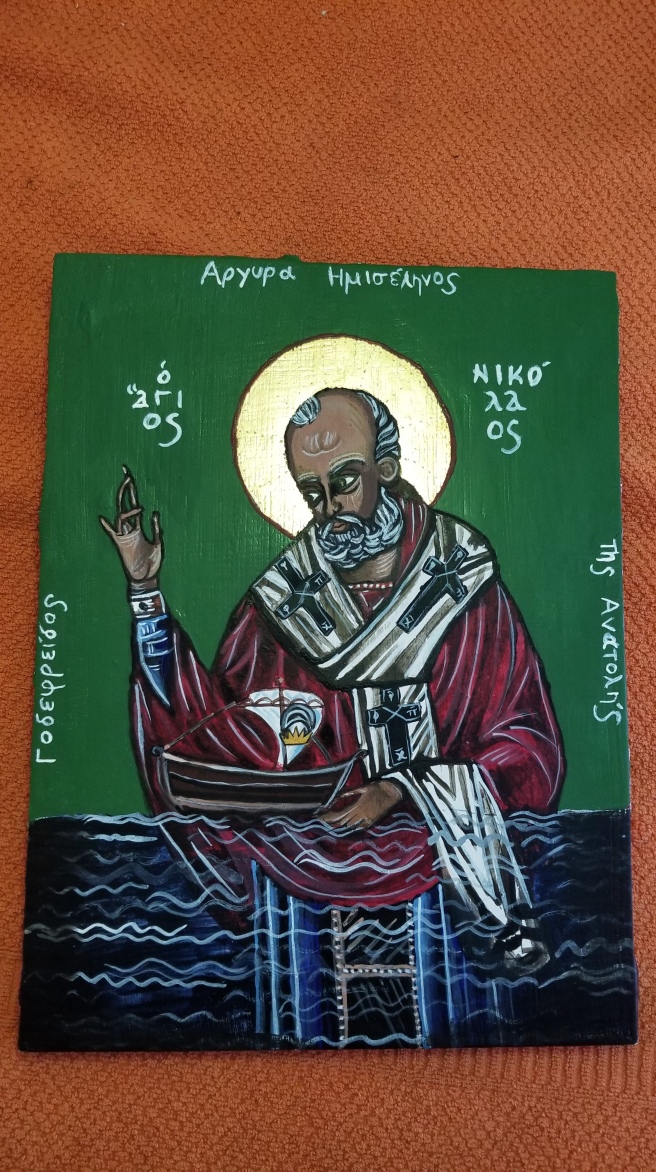