I made rose sekanjabin for the first time today, so I documented it by video. Sekanjabin is a syrup with origins in Medieval Persia. It’s typically made with mint, but a variety of substitutions can be made. In this case, I used dried roses, since I have way too much for my wine.

The video will take you through the steps, but here’s the recipe:

2 1/2 cups of homemade rosewater (I boiled 4 cups of dried rose petals and buds in 3 cups of water. I had to add more water a couple of times to get the right amount.)
4 cups of granulated sugar
1 cup of white wine vinegar

Combine ingredients and boil for a half hour. Let cool. Syrup keeps indefinitely in a bottle without refrigeration.

The wine kit was put to primary fermentation today! I will secondary in a week, then let it sit a month before conditioning, and splitting it into the different jugs for the Roman infusions.

Cloudy…I assume it’s going to clarify during the process.

I’m also starting to play with gin. Gin is actually a period beverage, well, it wasn’t CALLED gin, but juniper infused spirits go pretty far back, I believe the 11th Century. Let’s face it, gin is an acquired taste. My acquisition came and went after a long night of drinking that got capped with a G&T, so, I got revisited by the gin first. ~_~ This infusion is peppermint and roses. It took VERY fast, like, overnight fast, and I already strained it and started a new batch.

I will be VERY popular during the apocalypse. Homebrewers will be the richest, between selling booze for drinking and selling it for medicinal and antiseptic purpose.

But yes, welcome to Black Dolphin Brewing! Where my boyfriend and I make all sorts of delectable draughts of doom. (I love alliteration.) Since this blog is still rather new, I’m not going to backtrack to explain all that I have done so far. But, I am a member of the Smokingbridge Guild of Libation Brewers locally, and part of the entire East Kingdom Brewer’s Guild as well. I have yet to be paneled, but we’re working on that. WITH ROMAN WINE.

Of course it would be Roman, it’s what I do.

The Romans adored sweet white wines, contrary to the heavy reds that you often think of, Pliny the Elder gives us great insight as to how the Romans enjoyed their wines, from white grapes to heavy spices. Natural History can be quite a ponderous tome for those that don’t find him all that appealing, but, for a reference into how Romans viewed their natural world, it’s an invaluable tool for research. A free, solid translation of it is available online at the Perseus project through Tufts University here.

Pliny the Elder wrote during the Flavian Dynasty, and N.H. is dedicated to the Emperor Vespasian. Pliny is the reason why we have plinean eruptions, for the poor fella was killed indirectly from the eruption of Vesuvius in AD 79. Most likely of a heart attack, as he was quite old. His nephew, Pliny the Younger, watched on from another boat as his uncle returned to help refugees escape the nasty pyroclastic flow. It is from these men we have the best eyewitness account of the eruption. The Younger wrote Epistles, which is a series of letters between him and the Emperor Domitian regarding his governance of an eastern province. They are absolutely boring, BUT, they give a remarkable insight into the inner workings of Roman goverment in the 1st Century. But, I digress…

I will be re-creating two styles of wine to start. Since this is my first wine, I will be making a moscato from a kit. The muscat grape is very ancient, and was cultivated throughout the region. It’s not one of my particularly favorite flavors (I’m a chardonnay and sauv blanc kinda lady, here. HEY, at least it’s not white zin?) The kit will be ready for me at my friendly local brewstore tonight. (Check out Basement Brewhaus in Providence. Cool, helpful people.)

I plan to follow the kit through the primary fermentation, then split off two smaller batches for secondary in which one will be resined with pine sap (yum?) and the other with roses. Pliny mentions both at Plin. Nat. 14.24-25 and Plin. Nat. 19.19 respectively.

Pliny devotes most of Book 14 to wines and wine making. There is also calidum, the hot spiced wine drunk year round, and diluted with water, usually seawater of some sort. Pliny gives a whole chapter on salted wines. Those Romans and their wacky tastebuds…

Pictures will be coming forthwith once the fermentation process begins.

Garb does not blink into existence, but oh, how I wish it did.

I have a backlog of commissions right now because schoolwork is taking precedence right now in my life. I’m toward the end of my degree, and the classes are railing into me, this includes a capstone major paper on The Varangian Guard.

I haven’t really made myself any new “nice” garb in a while, because I don’t particularly have the time. My Viking dress was finished a year ago, and since I’ve made the switch to Byzantine persona full-time, I figured I needed more stuff. Well…I picked up some gorgeous jewel-toned linen and some trims at Birka for this project, and figured, “Oh I have PLENTY of time before I have to teach my class at Ice Weasel.”

Yeah no. A couple blizzards and the inability to get anywhere slowed me down greatly on the sewing front, because I couldn’t get to the laundromat or Joann’s for much needed supplies. This is annoying, but nothing life-threatening. So, as it stands, the gorgeous linen I have is still unwashed and shall remain that way until I have ample time to make myself this new tunica and dalmatica. Until then, I have older stuff I can bring to Ice Weasel I can use for the sake of the class. I would love to get my beaded dalmatica to a wearable state, so that’s an option, but…it’s Ice Weasel. Snow, ice, weasels. Okay, not actual weasels, but the climate and the fact I’d like to be outside supporting my lord in his first heavy tournament (I brought a newb into the society, teehee.) is more important than wrecking new, or nice expensive, garb. Plus, he’s been on my ASS to finish his Norman riding tunic, so that’s the project this week. I will post pics when it’s done.

Until then, here’s pics of my fabric and trim that will some day become my next tunica and dalmatica. Complete with antique silk saris I pillaged for trim.

Mint green for the tunica, dusty rose for the dalmatica. 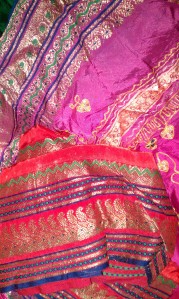 Some old, moth-eaten saris I’ll be cutting trim from. I’ll probably use the pink for the dalmatica, and save the red for a hand-sewn tunica I have planned for the summer.

It’s on Vimeo, go watch it and make fun of me!

Fundamentals of Roman Dress from Angela L. Costello on Vimeo.

This coming September, the East Kingdom is holding “Artifacts of a Life”. An event focused on crafting and displaying artifacts of your persona as if they would be found today. I’m STOKED. So many ideas!

Being that I’m 11th Century Byzantine, there isn’t a of material culture left, thanks to those SAVAGE BARBARIAN LATINS who sacked the Glorious Queenly City of Constantinople in 1204. So, I need to really think hard and outside of the box to pull this off successfully. I’m focusing on the idea that they should be artifacts, mere remnants of a material culture, rather than full extant pieces. Not sure if it’s a good idea, but, we’ll see.

Obviously right now my life is focused on my academic work in the real life, but I think this will be a really creative, fun event to attend, and it’s in the barony next door. Even better.

Despite 3-4ft snow drifts, unplowed roads, and a treacherous walk across my neighborhood to find a ride in a 4×4 Jeep to the event, I successfully cooked and fed my version of Minutal Ex Praecoquis from Apicius! The dish won best meat at Feast of the Gaunt Days, and my prize was a dried pig’s ear. LOL.

Here’s some pics of the process. The recipe is at this post here.

Pork roast, after being roasted. 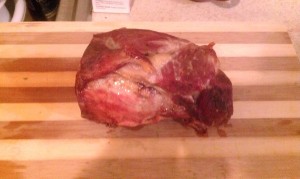 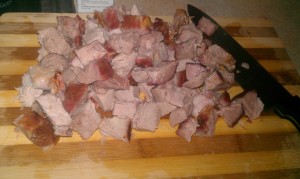 Passum: A white wine and honey reduction sauce. The honey surprisingly mellowed the flavor of the moscato.

Cooking the pork with the broth ingredients that included scallions, wine, oil, and the Roman staple: fish sauce. When this started cooking, the aroma reminded me of Asian cooking, like a Wonton soup. 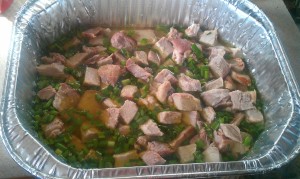 The sauce contents: aromatic spices, more fish sauce, the passum, vinegar, and honey. When this boiled, the house went from aromatic to, “What IS that vile smell?!” Oy, too much fish sauce! But it mellowed! 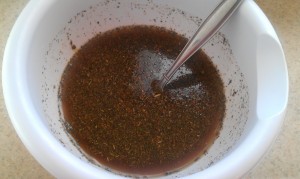 The finished product with the sauce, fruit, and panko added to the casserole.  I used A LOT of panko to bind it together, but that could be adjusted depending on how soupy one would want it.

The flavor at first was very salty. I thought I had borked it for good, but, the half hour drive to the site and some time on the chafing dish helped the flavors meld, resulting in quite a tasty meal! I got many compliments, including some from some well seasoned medieval cooks who asked for the recipe. They were quite surprised to find out this was my first attempt!

I’ll be trying this again when I have access to fresh fruits come the summer. It will provide a completely different experience, I’m sure.