Over the last few weeks, I completed a new court outfit based on the Eisiterion of Agnes of France, dated to the 1180s. It’s later period for my persona, but I was intrigued by the differences between the 11th and 12th Century as far as shape and embellishment went, so I gave it a try.

Now, this is an outfit that is not for every day, or even minor courts, this is specific to very formal events, and comes from a manuscript in which the 9 year old princess from France is brought into Constantinople and converted to fabulous by 70 (!) women wearing these outfits. I don’t know about you guys, but if I was a little girl, and I had suddenly gotten surrounded by weirdos looking like this and speaking a foreign language, I’d probably be pretty intimidated. Pictures will enlarge to show better detail. Courtesy of the Vatican Archives and their epic digitization project. 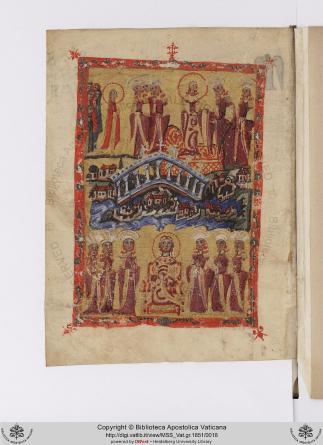 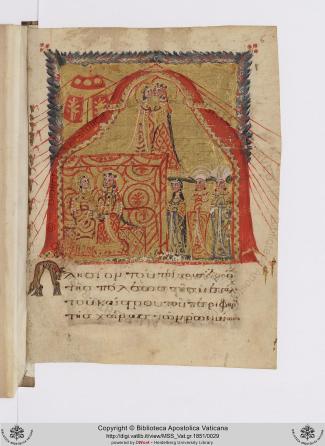 The propoloma is more “shovel” shaped than my other one, and I embellished it to make a coronet. Same procedure as the other one: 2 layers of wool felt and it’s self-supporting. Embellishment is shot silk, mother of pearl cabochons set in fine silver cups because I hate money, but I don’t hate it too much, since the bezants are gold-plated brass. Silver is one thing, gold is another, and I can only get my husband to cave so much.

Curves are very difficult to deal with. I tried the tube method, and the seams were unruly the whole time. I opted for the more tedious clipped and pressing method, and despite unevenness that I can see, it came out fine. The kharzanion (trinity temple ornaments) are wrong, and temporary.  Konstantia is making me a proper set, but we ran out of time. So, I opted for a pair of really ugly earrings my dad gave me as a, “Here, you do crafty things, find something to do with these.” And I did. They’re gaudy, but the whole outfit is pretty gaudy. 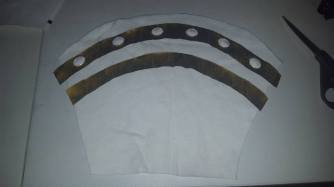 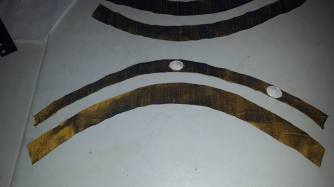 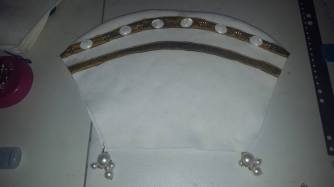 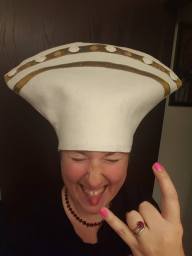 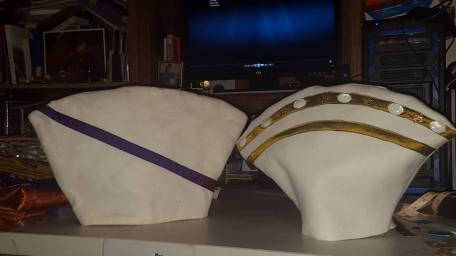 I made the delmatikion before the kamision. I wasn’t concerned about either, but I wanted to give it the time it deserved. The fabric is from Sartor.cz (Gird your wallets) and they called it the Oseberg textile. This is incorrect. It is a Persian textile that would have been available in period to Byzantium, but it is currently in a Japanese collection. Unfortunately, they only ran it in polyester, but as it’s in my heraldic colors, I couldn’t resist. The poly is super high quality, seriously, I never thought I would use “long staple polyester” in a sentence before, but I did. Aside from the expected fraying and nightmares associated iwth poly brocades, it sewed up really smoothly.

The Orange arm bars and neckline are made from the orange silk I purchased for my thesis project, which will be a post incoming upon completion. the arm bars were enhanced by some orange sari trim I had in my stash, and couched down faux pearls. The pearls on the neckline help hide the imperfections that probably only really bother me, but a Byzantine lady cannot have enough pearls. There’s no such thing, and, faux pearls are in fact, period.

The neckline itself is the side-keyhole design that pops up on some extant pieces. It closes with a shank button and loop.  Here it is to the point of hanging up pre-hemming. The sleeves have a 36″ drop. THREE. FOOT. SLEEVES. Oh, and they’re lined in a very light gold dupioni. The manuscript shows a white visible lining, but I couldn’t go with just white. 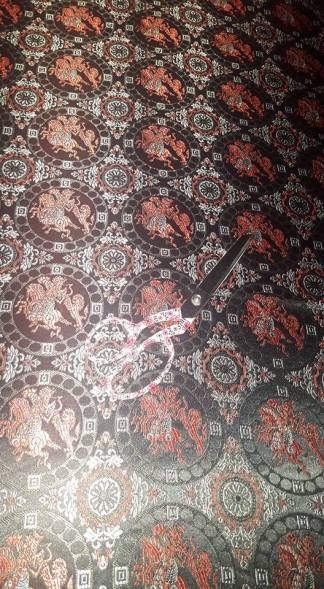 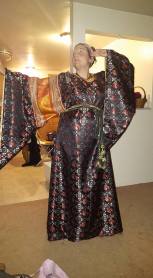 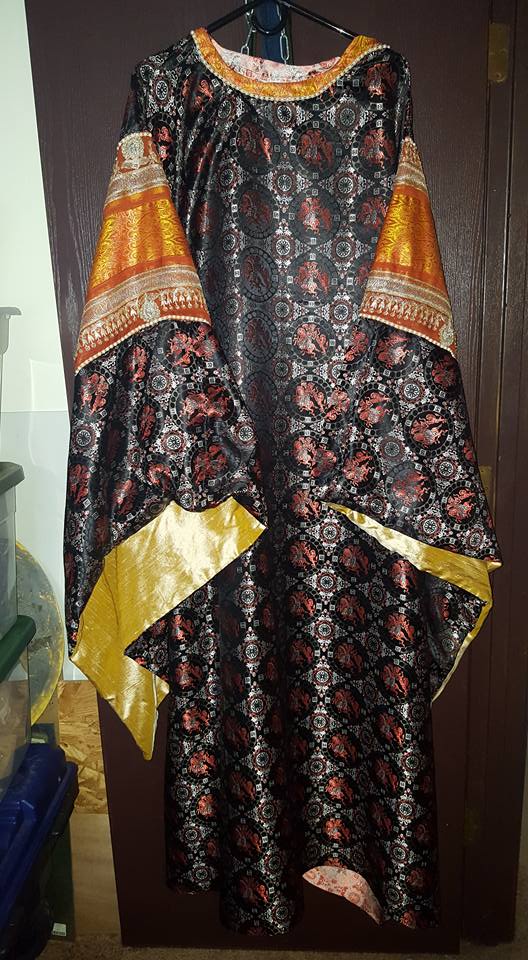 The kamision I wanted to double as a basic dress for when I’m not wearing a delmatikion for court, but still have enough pizazz for nice indoor events. More fake pearls on the neck to simulate a superhumeral, and more fancy sari trim. The neck and cuffs are faced with a green and red shot dupioni. The body is Pompeiian Red linen. This was my climate control once I got to the event site, because over 600 people plus polyester is no good.

The sari trim on this MAKES the garment, because it’s not a difficult pattern, and I know it like the back of my hand. I made adjustments for the sleeves since I was using a different bolt width, but that’s it. This is one of those demonstrations where embellishment can change everything. It elevated a simple tunic dress from “okay” to “WOW”, while creating no more labor for me had I used a commercially available trim. Work smarter, not harder. Though, one day, I’ll learn to embroider this well. I really want to learn, but time is not on my side at the moment. 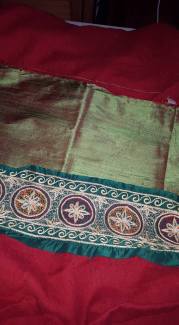 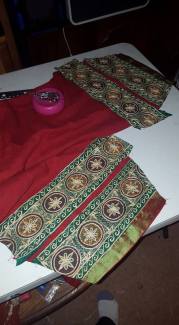 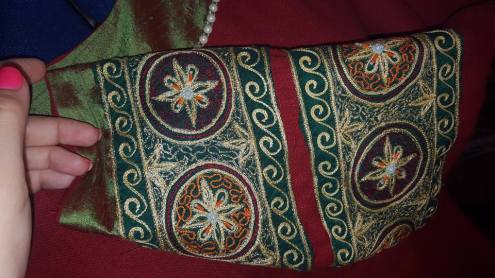 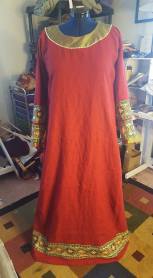 All together on the dress form: 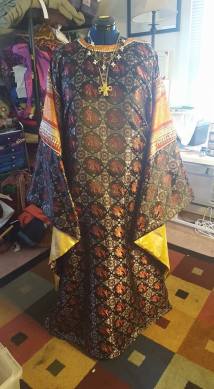 I made a fast maforion (veil) out of a semi-oval piece of the same silk I used on the propoloma. Some women in the manuscript have bands of color on them, some don’t, and it doesn’t seem consistent with the bands on the hat, so I left it plain for now. It took some creative pinning on my snood, but it worked. I’ll probably take a series of photos showing how I did it eventually, but I am so overwhelmed with schoolwork right now, updating my blog is not top priority, and I apologize.

Here’s the requisite goofy pics at Coronation. My sleeves were unevenly draped, which is killing my OCD, but the silhouette was there. Lord Brenden Crane took the professional shots in our populace “photo booth”. 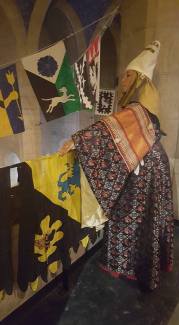 Oh, that side-eye pic was intentional. Byzantine side-eye is period. Here’s a shot from the same manuscript. The empress does not seem pleased at the emperor and his new friend. 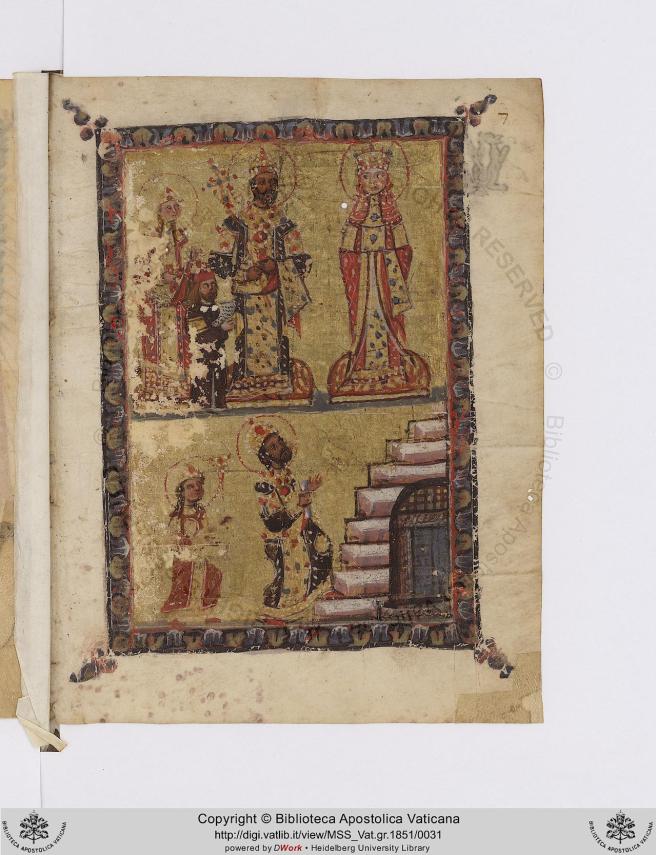