We have an event here in Calafia called Winter Arts. Being that it’s one of the few events in the barony where you’re indoors, typically, you want some fancy duds.  Back in September, a group of us decided that we would tackle something different, and something different being Burgundian.

Now, I don’t know about you, but I’m pretty sure 99.9% of the women and those identifying as such, who grew up with Sleeping Beauty, wanted a dress with a hennin and to be a princess and spin in circles and look pretty all the time when they were little.

…The 1% was me, who wanted to be Maleficent, but anyway, I digress. Burgundian is that clothing style that invokes the memory of a romantic High Middle Ages of pointy hatted damsels and dramatic gowns of fur and fancy fabrics. So, why the hell NOT do it?

Being that I was moving soon (note that past tense for the moment), I set limits for myself on what I could and could not use when drafting this project.

1: All fabric needed to come from my stash, or have minimal cost.
2: If I finished my gown, Gieffrei would get his, but not vice versa.
3: I would make the ridiculous hat and be fabulous.

Being that my fabric is mostly Byzantine, as a result, so was my Burgundian. I had a ton of black ecclesiastical stuff I picked up at a yard sale last year, and I decided that would be my gown, because nothing says high gothic garb like being…gothic. The kirtle I would totally do the right way with front lacing and make it fitted and supportive. By myself. Okay, sure, Anna. The fur I got from a friend who has bags and bags of the stuff because she does viking living history and random people just give it to her. So, I got the real mink. I don’t mind using real fur, especially if the animals had been dead long before I was born. Or in this case, my grandmother was born. We’re talking some seriously old vintage sleeves.

For the patterns, I used a combination of Reconstructing History, and the Medieval Tailor’s Assistant. I probably didn’t NEED the paper patterns, but sometimes I need a bit more of a visual in order to grasp a new concept, after that, I usually “get” it. Kass’ patterns are usually pretty simple blocks that give me a lot of leeway for customization and fitting, anyway.

These were my stages of madness:

I’ve wanted to be fitted for a cotehardie for a while, now. Despite all the crap I give my friends in the 14th Century Mafia (who all rightly deserve it,) I’m intrigued at the idea of having a supportive garment that is comfortable for all-day wear at an event. The short-sleeved type I attempted is more fashionable in the 15th Century, and often seen with contrasting, decorative sleeves. Using the basic bodice block that came in the RH pattern, I extended the skirt from it, versus attaching one at the waist seam (this is also seen in some period artwork I came across.) The real bitch was fitting it. You cannot do this by yourself. It was Thanksgiving night in my house, I was upstairs getting my chest jacked up by a friend who had come over for dinner. It’s what SCAdians do on holidays.

I need tweaks, but I did end up with a supportive gown. The material is a light wool coating, and it will work great as an undergarment, or a standalone dress. I figure once I get a proper fitting and pattern made for -me-, I’ll be way more successful, but as my first attempt at any form of the Gothic Fitted Dress, I can’t complain. I am soooooo not used to the wider neckline, though. I feel like it’s staying up by some sort of magic, and I pretty much feel naked, even though that is the style. (I also look pregnant, which is also, an unfortunate piece of historical accuracy that modern sensibilities need to get over.)

…Then I checked the weather. San Diego wasn’t going to get cooler than the 70s-80s for the event. Wool under brocade, even indoors, could be a death sentence. Did I have time to make another fitted one from linen? No. I would have to improvise, so I set this aside for another day. It’s currently hanging up on my closet door, needing more eyelets and a hem, and body linen, because wool against the skin is awful. I will be returning to this project.

This was way easier than I thought it would be. Rectangular construction on the body, fitting your figure on the side seams above the gore, and inset sleeves. I finished the bulk of the gown itself in a matter of 2 hours on my machine. The hard part would be the fur, but that was being saved for later. I skipped the train, because I don’t like people stepping on my garb. Fortunately, there was plenty of fullness without it. The v-neck is simply shaped out of the front seam.

Jeff was super reluctant to do this, SUPER reluctant. Not all men are into the idea of fancy later period, so it took some coercing. I would make the garments in the larger, less fitted style versus the short, pleated doublets of younger men seen in period artwork. This also eliminated my need to fit my husband for joined hose, and he could get away with wearing a set of braies and chausses. I had a nice herringbone linen tunic he could wear as his undershirt, and we would just fluff him up with accessories to give the period look.

I was short on fabric for the houppelande, but I did what I could. He basically had no gores to add any sort of fullness, so I had to work with the width of the brocade. This resulted it things getting off center and making me want to cry.

In the end, it came out passable. AND FAKE FUR IS AWFUL TO WORK WITH.

I also knocked out his chaperon/dagged hood in about a half hour. I did this the traditional way, just cutting the hood out of the wool and sewing 2 seams. Then you roll the face opening of the hood up and plop it on top of your head so you look like a weirdo. Bam! Instant hoodlum. (This is where the term comes from!)

We had a hat day that included brunch and mimosas. If you don’t craft with mimosas and brunch, I highly recommend you try it, it seriously helps.

I’m not a hat maker, I’m pretty awful at it, so I was expecting to make a regular truncated hennin and lappet, and call it a day.

But no, Anna can’t do anything basic.

Adelwyn made the pattern for the double hennin from The Medieval Tailor’s Assistant, and my brain went full on Sleeping Beauty evil fairy queen at the sight of it, and the rest was history. We shared the pattern, and I got to fight with buckram.

And that’s when Maleficent was born. I decided that I would cover the hennin in the same black fabric as my gown, and I would make the replacement kirtle out of this fuchsia linen I had just laying around in my stash. It wouldn’t be exact, as Maleficent is clearly wearing a houppelande and not a fitted gown, but I would make it work.

There is one thing worse than real life punching your SCA, and that’s real life punching your EVERYTHING. Without warning or explanation, Gieffrei’s orders back to the East Kingdom were cancelled, nine days out from turnover and twelve days from our scheduled move. He was being rerouted to an unincorporated corner of Meridies on the Trimaris border in February.

This sucked the life out of me. Right. Out. I already suffer from depression and anxiety, and I will be making a post about this next, but this was like taking a baseball bat to the chest. What about our house? What about my job? What about my life? Everything we had planned to do when we got back to New England was ripped out from underneath us like a carpet in a cartoon, and it hurt just as much.

In one final blow, his current position ordered him to work during the event, after I had done all of this sewing for the both of us.

Winter Arts stopped mattering. I was ready to toss the project aside, curl into a ball and cry while I mourned the next 3 years of my life. Jeff was having none of this. I got dragged upstairs back to my studio, and told to finish it for him. He stood and watched as I cut the covers for my hennin, and he gently cut the seams on the vintage mink for me while I sat at the sewing machine spewing vicious epithets at the US Navy (which didn’t hear me). The project was now a rage sew, versus a fun new thing.

Nothing special about this, just making the wider neckline out of a typical tunic dress. Fighting my depression, I threw this together in 2 hours of absolute rage including industrial music at full blast and yerba mate tea. I wasn’t sleeping anyway, so it no longer mattered. I think it was like 10pm when I took this picture.

I was down to the wire. The hennin needed to be covered, attached, and veiled. After I covered the buckram, I made the fillet out of black velvet, and put it on over my gold snood. This provided a base for the pins, and created friction to keep the hat on. Normal hennins that encompass the entire head will sit on your head without pins as long as this band or lappet is in place. It’s a neat trick. I dug out one of my favorite dirty pilgrim badges as a piece of flare. 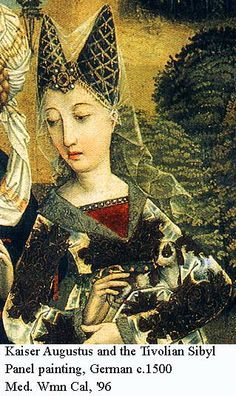 The night before, I was working on the belt and Adelwyn came over, and I helped her figure out the last pieces of her puzzle. Isolde also showed up, and offered to attend the event as Gieffrei so the garb would get worn.

I still had to attach the fur and the sleeves to my gown. There are no pictures of this. It’s me, on the couch, sneezing a lot from handling old fur, and tacking it down onto my dress in a manner that I could remove it.

Around 9pm, I finished.

I have to admit, I totally felt like a damn princess. Not in the SCA sense, but in the little girl fairy tale sense. Pointy hats, full dresses, this is the Middle Ages we all know as a little kid. The best part, is that everybody in the group did different variations of the houppelande or fitted v-neck gown, so we really looked like the amalgamation of color and hats that is seen in the period paintings. Totally worth the stress.

I had to throw in this last finishing touch. Maleficent leggings to give the stealth cosplay a bit more fluff.