So last spring after another botched attempt at iconography, I was prepared to give up the art form entirely. I’m not a painter, and the stuff I draw primarily is Japanese anime, which is, uh, so not period or even appropriate for icons at all.

This fall, I was asked to offer my skills as an artisan to the East Kingdom gift baskets to be given out at Pennsic. I accepted, but I wasn’t sure what to do. I decided, reluctantly, to pick up the brush again, but first I needed to practice.

I invested in new supplies: new pigment colors, new brushes, real gesso, and bole and olifa from an icon supply place on the internet.  I also went and got some real gold leaf, despite still having way too much composite from my previous projects I should use up first. I have silver and copper composite leaves that I picked up cheap from an art supply store locally, so I wondered if they would be of any use on practice pieces before I potentially wasted the good stuff.

Most icons are done in gold, but there are a few in silver encasement. After I did some digging, I did find this 11th Century icon with embossed silver leaf, so I figured that was at least some evidence that silver was being used in period on icons.  I used this as an excuse to blow through 4 sheets of composite silver on this piece.

I chose St. Lucia since she was from the same town as my persona. Local saints were prized in the Middle Ages, and that’s a good enough reason to assume that I would have strongly venerated her. She is also a patron of seamstresses, so a little saintly intervention in the sewing room can’t hurt. 😉 There’s plenty of modern icons patterns to choose from on the internet, so I picked the one I wanted, grabbed one of my remaining Gessobords (This one is 9″x12″), played with carbon paper, and followed the same steps as I did previously, only on the pretense of leafing all the things. The leafing took about 3 hours. Even with the larger sheets of fake stuff. 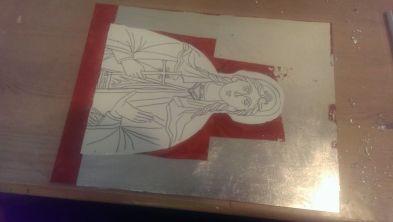 I soon learned that embossing composite leaf was not going to work. I did more damage than anything, so I repaired the leaf where I borked it up, and decided to leave it flat. There’s plenty of flat gold icons. I may not be able to find a flat silver one, but we’ll call this a creative anachronism. (I mean, composite after all.)

So the painting started, with the layers being applied over several days. Mostly snow days, thanks to the lovely winter we’re having in New England. (Lovely as in @@#!#$$!!!!) 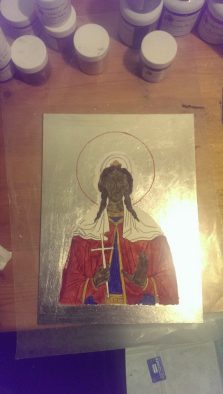 I started to get nervous as I began to work toward the upper most highlight layers, this is where I had screwed up before. So, taking deep breaths, and using my new, thin brushes, I worked carefully, putting in no more than 2 hours a day over the course of about 7 days total. The finished results shocked me, they shocked my husband, they shocked my friends. I couldn’t believe I pulled off an icon that well, looked like an icon. 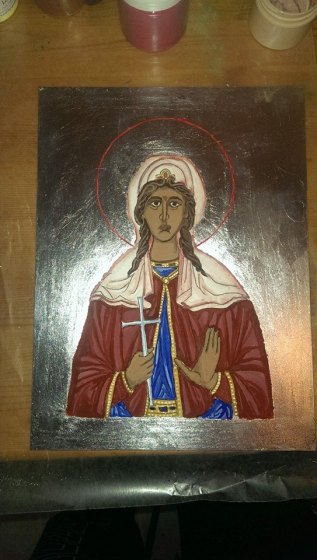 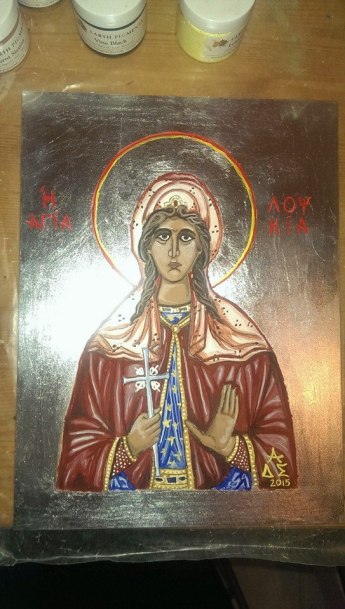 I did it! I really actually DID IT. The best part is that she’s for meeeeee! I get to keep her and admire her next to poor Archangel Michael and show her off in displays without feeling mortified at my attempt.

The only real thing I don’t think I will ever do again is leaf or gild an entire panel. It was a pain it the butt to paint over where it accidentally got on the drawing. In fact, her halo and inscription are actually in acrylic. I had to cheat in order to get anything on the leaf. I’m sure that the real gold won’t act like the fake stuff, but I’m not about to try it right now and find out. Let’s get better at what I’m doing before I start ruining sheets of 22k gold.

In the mean time, Lucia is aging over the next week or so before I seal the leaf and oil the painting with olifa. And I plan to bring her and some other goods with me up to Montreal for King and Queen’s Arts and Sciences next month.

I also re-did my Iconography page with a more complete gallery and link to my tagged archive. Do go check it out.