So I was able to get some calcium carbonate (natural chalk) from a brewing supply store, and decided to, you know, put it on my face with the other questionable materials I’ve been using.

Okay, so…the article I’m using as a basis for this starter kit said that the chalk was mixed with vinegar. So, I raided my kitchen for white wine vinegar that I typically use to make sekanjabin or oxymel, and combined the two in a plastic cup. This immediately caused the fizzies due to the reaction of the acetic acid releasing the carbon, much like what would happen with sodium bicarbonate (baking soda) but not nearly as explosive. This intrigued me and worried me, but it seemed too thin, so I added more chalk to get a paste that was more reminiscent of a modern liquid foundation. I slathered it on my arm for a patch test, and let it dry. It didn’t look so bad or cause a reaction, so…

…I slathered it on my face…

As you can see, it was a bit…paste-like, and didn’t blend well. It clung to every wrinkle and scar or zit on my face, and I immediately remembered I was in my 30s. So I washed it off with soap and water and it came off quite easily. (Note, it’s not in my hair, that’s my Rogue stripe.)

So I thinned the paste with more vinegar, and got a more powdery, fast drying finish. It was still lightening my skin, but not the consistency of glue.

Quickly, it was evident that thin layers would do the trick. It’s not an emulsion like a modern foundation, and therefore the mineral can be displaced and clump easily, as you can see on my eyebrow and cheek. I did apply it with a modern cosmetics brush as well, so I need to do more research into period applicators, that should also help.

Well, there was only thing left to do: PUT THE WHOLE FACE ON. I went lighter on the red ochre this time, since I haven’t yet made my balm for it as planned. I should do that, oh, tonight.

I applied the lamp black to my eyebrows and as eyeliner using the olive oil mixture from my first post. (I also patch tested this. ALWAYS PATCH TEST!) I went a bit crazy with it on the eyebrows, I need better brushes to tone it down. Eyeliner was done by toothpick. 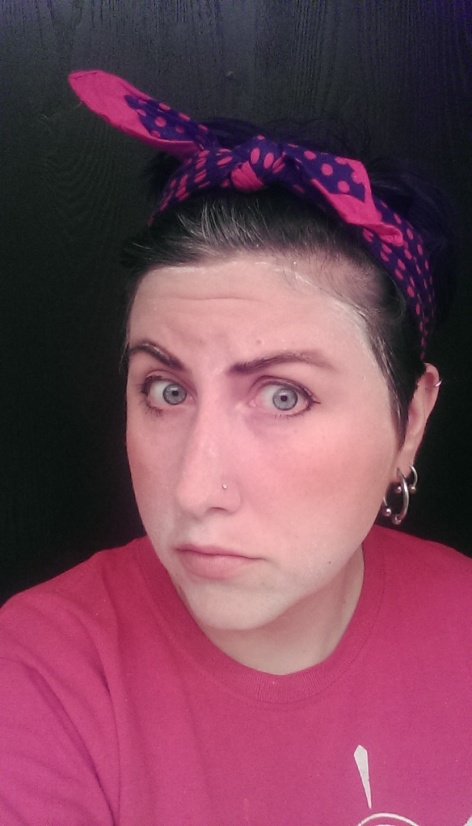 This side was a bit heavier, and I look even less glamorous: 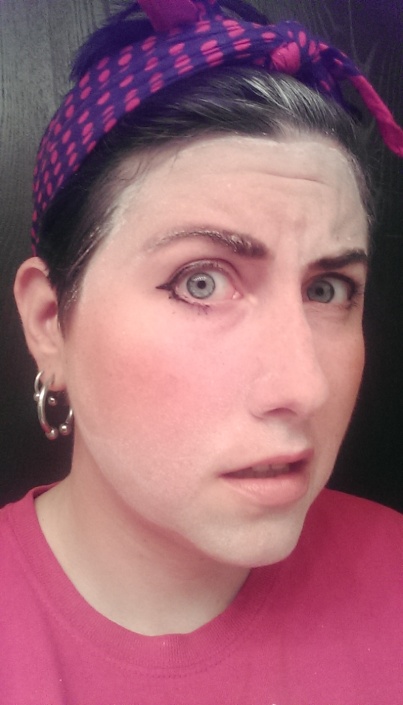 Of course, now I had to take this stuff OFF. Modern soap and water worked fine for the chalk and the ochre, but the carbon?

I was able to remove it using the olive oil mixture it was applied with, to a point, and then with a non-oil based modern makeup remover, which helped but wasn’t great. The oil is needed to break up the black. It’s very staining, and I wasn’t able to remove it completely, so I think a modern oil-based remover would do the job nicely.

So, I now have the beginnings of a basic Roman makeup kit which should make my A&S display this weekend at Palio di Stonemarche an interesting one. I hope to have something more to show come Pennsic.

A pigment used for blush and lip stain from Egypt through Byzantium was red ochre. This is a very safe, non-toxic pigment that is derived naturally from iron oxide (rust) and hematite. It’s been used in artwork since the cave paintings in France, so we know it’s been around for a very long time, so use in cosmetics would make sense.

Like I mentioned, it was used as a blush, and a lip gloss. The Roman women were known for going a bit…overboard with their rouge, so sayeth Martial, who was convinced their faces would melt. Well, here’s my face, complete with annoying duck face (I HAD TO) slathered in rust. Really. Note my bathroom light for whatever reason makes my black hair look purple. It is not. It is black, but other than the the pigment looks correct.

This is 100% natural red ochre pigment that I use for my icons from Earth Pigments. I applied it to my face using  a modern angled blush brush.

My right cheek I applied the pigment straight on with knocking the brush a couple times to remove excess. The resulted in…OH MY GOD. ORANGE CHEEK, with next to no fall out.

My left cheek I used the brush after I had used it on my right, and it gave a nice bronzing effect. This would have been a lovely healthy glow that I think the Egyptians prized, but Roman ladies apparently were a bit more bold with their color usage. 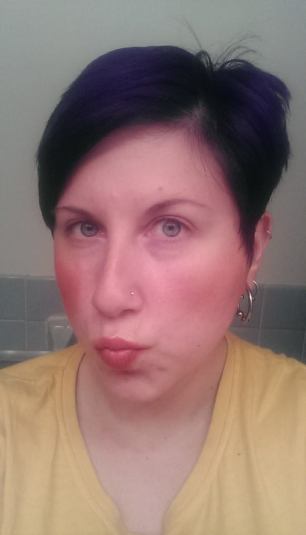 I applied the pigment to my lips using a Q-tip soaked in olive oil. The pigment still dried my lips out quickly, but it did not burn.

I assume once I get the chalk and vinegar face paste on there, it will look even more ridiculous. I will be making that up once I find powdered calcium carbonate, which is true chalk, versus the gypsum chalkboard “chalk” used today. I should be able to locate it in a vitamin store or a brew store.