I field more emails and more online questions about the Varangian Guard than I do actual Byzantine personae. I lifted most of the information below from my Byzantine Personal Basics page above, but I’ve included a bibliography to hopefully help those on the path find what they’re looking for.

I’m going to preface this by saying that I have nothing against Varangian personae, but I’m about to be very blunt: Varangians are not Byzantine.

The Romans viewed them as barbarians and outsiders, and despite the fun tales from the Norse Sagas, chances are, they weren’t well liked in the City. The truth of the matter is that there are currently more Varangians in the SCA than there ever was serving an emperor at one point in time due to the fact that it gives Norse personae an excuse to wear lamellar when it’s hot (which is fine, we don’t need anybody dropping dead at war, please). Not everybody could show up at the Blachernae Palace steps from somewhere up North and demand they be admitted into service to the Purple. It was a bit more complicated than that, and each emperor had different requirements. Not to mention, Varangians were only predominantly Norse for a short period of time in the mid 11th Century if we assume what the Sagas say is true.

The first Varangian Guard was not established until the late 10th Century (around 980) when Basil II was given thousands of Kievan soldiers in exchange for marriage of a Byzantine princess to the Prince of Kiev in order to defeat the Bulgarians. The Kievan Rus were not Norse, they were Slavic, potentially with Norse ancestry, but the term “Viking” itself is a particular Norse occupation. The “Viking Age” was pretty much over at this time. We do have record of plenty of Norse travelers coming to Constantinople prior to this, but the “Viking raid” in 860 was actually Rus that had come down into the Black Sea from what is now Ukraine.

To further screw things up, the term “Varangian” itself was used by both the Romans and the Rus to refer to Norse Vikings prior to the 10th Century. So, if this is the route you desire to go, determining if you’re just a Norse traveler from early period, or an actual member of the Emperor’s elite guard is important.

If you do decide to go Varangian GUARD, here is a list of “waves” of ethnicities that served at specific times. This is by no means set in stone, but it provides a guide for those that want to pinpoint a specific time period that suits their goals:

1070-1204ish: Danish and English (Anglo-Saxon). The term “Danes” comes up in Byzantine literature often to describe the Varangians, and the English were escaping Norman rule in England at this time. This is documented in the saga of Edward the Confessor. Siward Barn served at this time. Normans were NOT permitted to be apart of the Varangian Guard, but some may have served as mercenaries in other capacities.

There are a lot of myths surrounded what they actually wore, especially in the SCA. The “red is for the Emperor’s service” and “green is for the Empress’s service” is totally a SCAdianism as far as I’ve found. It looks like the on-duty color for the guard was blue or red, while off-duty, you see them in nothing more than plain tunics and slim-fitting trousers or hose, which was typical for men’s casual wear throughout the empire. Earlier travelers would have continued to wear the clothing of their culture, versus picking up stuff along the way. Clothing was expensive and difficult to carry and launder, so the other SCAdianism of having a diverse wardrobe boasting the latest fashions of every exotic port of call you visited is also inaccurate. They would, however, assimilate over time if they decided to stay put in an area. This does not include trade goods, but items that were exchanged in business were not necessarily the same as the clothes you wore on your back.

As far as religion goes, during the period of the active guard, most serving were already Christian, or converted to Orthodoxy from  a later, heavily modified and somewhat hodgepodged version of Arian Christianity which was more common in Eastern Europe and the Scandinavian countries very early before the Western Church started coming in with missions. Please, remember that Arianism IS NOT THE SAME THING as Aryanism. Mind your i’s and y’s! Either way, the idea of your persona dripping in lovely Asatru regalia would be incorrect as a guardsman, but as a very early Norse traveler to Constantinople, still possible.

I totally just ganked these images off of Wikipedia since I know they’re there, but you can check out the Madrid Skylitzes here: https://www.wdl.org/en/item/10625/

And for those that want to actually do homework, here are the goods:

The Saga of Edward the Confessor. Translated by George Dasent. 1894.

No, really. Somehow, it ended up in a box of our holiday decorations because that’s how military packers and movers roll.

We aren’t pros, we have a basic know-how of the art thanks to a couple classes at Pennsic, and dropped a few hundred dollars on supplies because it sounded like a good idea at the time and then FORGOT ALL ABOUT IT.

So we decided to fire it up and see what kind of horrible we could make. We have a Sutton Hoo-era Coronation for our last hurrah here in Caid, so might as well go all out with some Anglian enameled jewelry. Sure, we could totally do this.

At first, we figured we’d actually just splurge for the holidays and get ourselves some new shiny bits from Raymond’s Quiet Press, since he has a great selection of Saxon goodies, including Sutton Hoo replicas. But, my husband rarely gets to play with his metalworking stuff, and we found the enamel, so, why not try stuff for ourselves?

Deciding that we were going to turn our early Anglian garb into Founders Era Harry Potter subtle SCA cosplays of Rowena Ravenclaw and Godric Gryffindor (Yes, I know that they founded the school in the 10th Century and not the 6th, but they were Anglo-Saxon so bear with my madness, please, we go any later and my Norman husband will declare war on himself and things get messy) I started planning stuff out, since I’d be doing most of the work, anyway. I needed brooches, but since I’m Ravenclaw, I needed some house pride.  I’m really unsure if the plethora of bird brooches used between the Anglo-Saxon, Frankish/Merovingian, and Gothic cultures were used on the peplos dresses, but I decided to take that risk for my impression.

Now, there’s some REALLY IMPRESSIVE enameled and inset stone eagle fibulae out there. Way beyond what I can do, so I needed to keep it simple. I found that Quiet Press had a style I could possibly emulate, only in red, but I wanted to find his source before being a jerk and ripping off a respectable merchant I buy from frequently. I have no intention of selling my enameling work, or even attempting to compete in the reenactment jewelry market, ever, so I used that thought as a soothing mechanism, and reminded myself I was still learning. I still sought to find a few other birds I could work from for my “eagles.” (Let’s face it, they all look like Gonzo.)

This guy is from a lot at Christie’s, and I decided I liked the wire work for the cloisonne and the inclusion of the pearl. As you can see, red garnets were the thing for this period, but it didn’t work with the color scheme I’m going for.

Finding enough supporting evidence for my Gonzos and some line variants, I went ahead and made my shape, and the Norman cut them out of copper, which was chosen for the type of enamel we have. They do make enamels for bronze, brass, gold, silver, etc, but we have the copper kit.  I sat, watching some bad television, and filed the edges of my birds down while the kiln warmed up. It went pretty fast.

Once things got hot, I went ahead and prepped the pieces with the clear base coat: 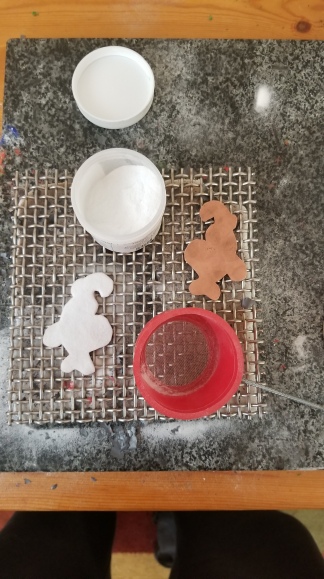 Once they were fully cooled, I started the wire work. A note about the temp: this is not a “fresh out of the oven” hot, this is surface of the sun hot. You will get severely injured if you are not cautious. This is 20g copper wire. It took me quite a bit of time, and I used Thompson Blue Stic glue to keep it down. I am unsure if any adhesive was used in period, but I assure you, it’s a pain if your wires move. It’s also a lot easier to work with smaller cuts of wire, as I found out almost immediately.  Hopefully as I improve, I can handle manipulating larger pieces. 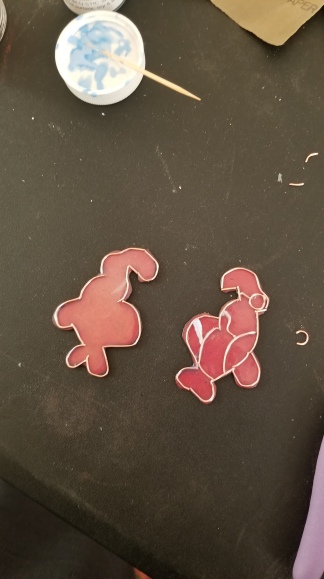 Once the glue was dried, completely (this is not a “fast” art), I put down the blue enamel, emulsified in water.

Fire! You can see how red-hot the stones get. 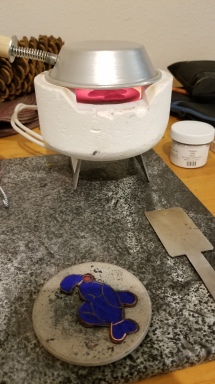 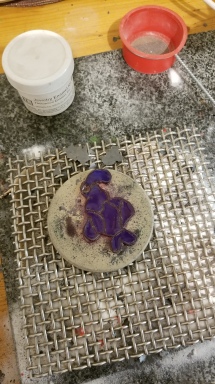 And cooling down to the blue. I had to do a second coat with the enamel since I had some coverage issues. 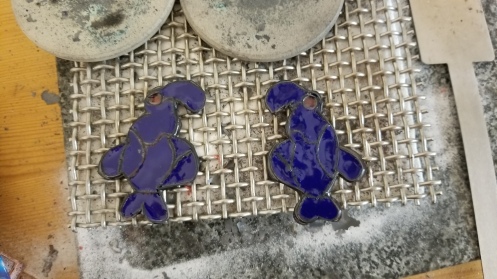 Husband made some fibulae pins from brass wire, and he showed me how to solder them on in about 5 minutes. Again, HOT. LET COOL. OMG. SO EASY TO REALLY BURN YOURSELF. 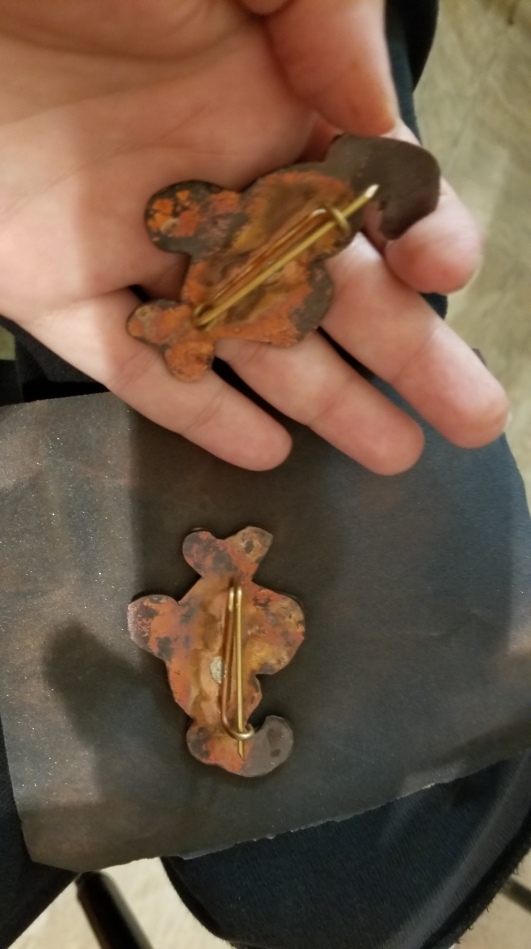 And then the sanding. This is how you get your wires to show up again, after oxidizing in the kiln. During the process, one of the brooches popped some air bubbles in the enamel. This upset me, but I’ve seen period pieces with similar imperfections. Part of the learning curve, I suppose. I was still pretty pleased (see also, hooting, hollering, and down right ECSTATIC over how these were coming out.)

For the finishing touch…pearl eyes. We gently sawed a couple pearls in half to get the right size, and glued them in the eye sockets. The period technique would have them set in, but I’m not really there as a jeweler, and probably never will be, but Gieffrei insisted I do this almost entirely myself, so…E6000 it was.

But seriously though…they aren’t museum quality works of art, but I am insanely proud of this project. Behold, Rowena Ravenclaw’s Gonzo, I mean, Eagle, fibulae!

I have a long way to go before I’m ready to do intricate Byzantine style enamels, but it certainly beats my “warm-up” project from the day before.

I learned a lot. I think I learned how to do some troubleshooting on the appearance of the enamel, but this is going to take some time to really get into. I have some great friends in the East Kingdom that do enameling, so next I see them, I’ll have to see what kind of tips they can give to work with the minimal tools we own. I don’t know if we’re going to invest in a larger kit just yet, because it’s not our primary art form, but rather another corner of the Middle Ages that have entered our home. Or rather the entirety of our dining room. In fact, we had a ton of friends over on Saturday to give it a try with us, and we had a ton of fun with great results just after 2 little projects.

Well, I suppose Godric Gryffindor needs some kind of lions next. Stay tuned for the next segment of our Anglian Experience.